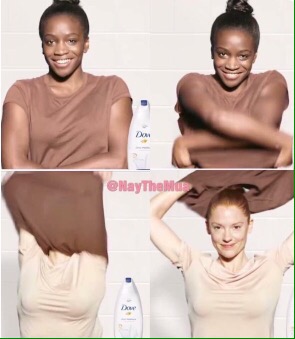 Soap giant Dove is under fire for posting an ad that depicts a Black woman peeling off her shirt to reveal that she’s a white woman after using their soap.
Critics quickly called the ad “racist” and “deeply ignorant.”

“What does America tell bBack people … that we are judged by the color of our skin and that includes what is considered beautiful in this country,” she wrote.

“To know that colorism is a problem in the world, that includes bleaching the skin, and they would put this ad out without a thought … the tone deafness in these companies makes no sense.”

After getting dragged online, Dove has since apologized.
On Twitter they wrote:”An image we recently posted on Facebook missed the mark in representing women of color thoughtfully. We deeply regret the offense it caused.”

Thought that Dove ad was fake until the apology happened. People actually sat at a table and said "Yeah post that p… twitter.com/i/web/status/9…—
xoNecole (@xonecole) October 08, 2017

@Dove Again. There is a history of racism in cleansing products. No way anyone didn’t notice that in the dove ad https://t.co/rXNd6144V3—
George M Johnson (@IamGMJohnson) October 08, 2017

The first thing that came to my mind when I saw that Dove ad. The centuries change, but the racism remains. https://t.co/DcDdL7O9nw—
fredara (@fredaraMareva) October 08, 2017

And then…this. From @Dove. “Missed the mark.”

Please don't say "obviously wasn't black ppl in the room when they made that #Dove ad." There might've been. Doesn't mean anyone listened.

You cant tell me Dove didnt see anything wrong with that ad..

And as this person pointed out, this isn’t Dove’s first offense:

@BBCNewsbeat This is not the first time. Here is another similar ad from @dove in 2011! They need to fire their ad… twitter.com/i/web/status/9…—
ThatGirlAtTheParty (@tgatp) October 08, 2017