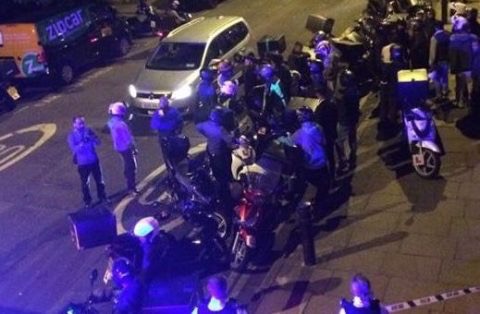 The first people on the scene of last nights London acid attacks were food delivery drivers.
Around 25 riders from UberEats and Deliveroo swiftly swung into action when a man was attacked.
Teenager arrested after five acid attacks across London in 90 minutes

Witness Sarah Cobbold said that she believes they had heard about what had happened so rushed to help.
She said: ‘I had thought someone must have chucked petrol or acid on him or something because they were covering him in water, but I have never seen that reaction to an attack, I thought maybe there had been an accident.
‘I had literally just walked in the house, I was stood where he was 10 minutes earlier.
‘I don’t think I would have been attacked but it could have been quite easy to have been caught in the crossfire here or at the other locations.’
A spokesman for UberEATS said: ‘We were shocked to hear about the horrific acid attacks that happened last night.

‘Some couriers who work with UberEATS were in the area and able to help where they could. We are trying to contact couriers so we can help the police get any information that will assist their investigation.’
Two men on a moped carried out five acid attacks during a spree across London which lasted less than 90 minutes, police said.

The Metropolitan Police said one victim had been left with ‘life-changing’ injuries after being doused on Thursday night in the east of the capital.
The assaults appeared to be linked and two involved victims having their mopeds stolen, they added.
A male teenager was later arrested on suspicion of grievous bodily harm and robbery and has been taken to an east London police station.
Hero UberEATS and Deliveroo riders rushed to help London acid attack victim

At the start of the rampage, a 32-year-old moped rider had been approached by the pair as he drove towards the Hackney Road junction with Queensbridge Road.
Police cordons had been lifted by the morning, but the street remained strewn with empty plastic bottles.
Sarah Cobbold added: ‘It was just outside my flat, the victim was literally stood on my doorstep.
‘It was probably about 10.30pm, I saw some reports that it happened at 10.25pm so by 10.30pm there were a couple of police cars and an ambulance there.
‘After about 10 minutes I still saw the flashing and went out on my balcony and looked over the roof to see what is going on.
‘Police had cordoned off the little area around the pavement and there was just a guy standing on my doorway and they were pouring huge, five-litre bottles of water over his head.
‘He was standing, he seemed to be OK. After probably about 10-15 minutes he managed to walk unaided into the ambulance. I hope that means he is OK; the ambulance certainly didn’t rush off with sirens.’